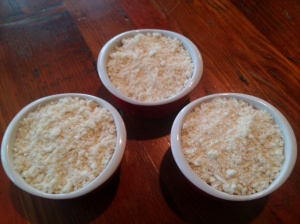 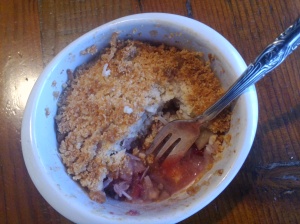 I made these to take to my Dad and Stepmum’s for dessert as a thank you for babysitting, but mainly to highlight things can still taste good without sugar!  They were great, so I thought I should share the recipe.  The recipe below will serve three people, please adjust quantities accordingly if feeding more than three.

Preheat the oven to 180 degrees celcius.  In ramekins, layer the pear and apple with cinnamon, nutmeg, sultanas and frozen berries, taking care to have a fairly even layer of apple and pear for the top layer.  Sprinkle the coconut over the top layer.  In a small bowl, use your fingers to crumble the creamed coconut and almond flour together, cook in the oven for 15-20 minutes or until brown on top.